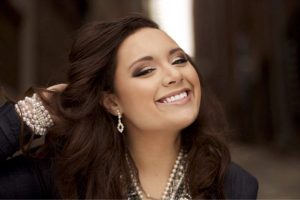 Kayla Padgett, is an Award-Winning Gospel Recording Artist, singer, songwriter, musician, actress, and Producer. She is the CEO and Radio Host of The Finding My Way with Kayla Padgett Radio Show Channel. Kayla Padgett began singing at the age of nine. She found her voice while dealing with the grief and pain of her grandmother’s death. Kayla never imagined how God would use this traumatic event to develop her voice, talent and use her to bless others.

At the age of ten, Kayla recorded her ten-track debut CD, aptly titled, “A Perfect Ten”. At 12, she returned to the studio to record again. As she began recording, Kayla discovered that she had developed a passion for songwriting. Production stopped, to give Kayla time to write the songs for her sophomore album. Kayla’s sophomore CD, “The Redeemer’s Love” was recorded at TBN and released in March 2012. “The Redeemer’s Love” is a compilation of Kayla’s most requested songs.

Kayla made her debut on radio on January 25, 2012, as the host of The Finding My Way with Kayla Padgett Radio Show. Her radio show has listeners around the world in Korea, Africa, Europe, Morocco, India, the USA, and other parts of the world. Kayla is now CEO and owner of her own Radio Channel and is currently producing multiple radio shows under her leadership. Her radio show was recognized by News Channel 3, Channel 13, and numerous radio shows in the USA for being a young radio host and having listeners around the world. Kayla’s show is an international radio talk show. Kayla has interviewed a variety of guests from all walks of life. Her guests have included CEOs, Founders of businesses, Ministries, Doctors, Attorneys, Authors, Politicians, Recording Artists, Pastors, and more.

Kayla speaks and writes several languages. Her bilingual abilities have allowed her to minister to souls around the world. Her languages include Korean, Chinese, Spanish, African Igbo, Amazigh, Zulu, and some Japanese.

Kayla, whose Korean name is 홍카라 (Kara Hong), attended a Korean school where she worked to improve her self-taught Hangul. She believes the Lord is leading her to a future that includes ministering to the Korean people. Kayla’s song “Holy is the Son of God”, was written and recorded in Korean, for use in missions and worship. Kayla is not Korean but has a great passion for Korean people.

Kayla has a HUGE HEART for Missions and God’s precious people!